Home  »  Amazing & Animals  »  Two Lion Brothers Freed From Life Of Cruelty Embrace One Another. Now See What They Do @0:35
Click

Pancho and Temuco are two lion brothers that were rescued from a cruel life as circus performers in Bolivia. The joy they feel of being freed from a small cage that used to be their home is evident in this video as they nuzzle and play with one another.

Animal Defenders International was the rescue organization that stepped in to save the pair from the circus. The group says the big cats really appreciate the simple things in life. Even just being given some straw to lie on delighted the two animals.

It’s a joy to see the brothers being able to be affectionate with each other and know that they never have to endure neglect and abuse again.

Pancho and Temuco were starving and endured many hardships before their rescue. The circus who owned Pancho and Temuco tried to slip away with the big cats, but ADI stopped them and brought the lions to their sanctuary in the United States, where they now live happily together. 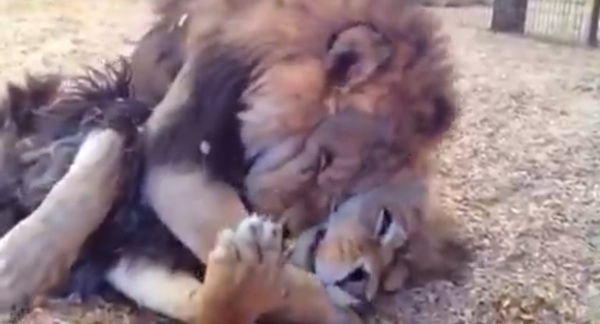