Blake Shelton and Adam Levine have always brought their bromance humor to the set of NBC’s “The Voice.”

But, it’s looking like the Maroon 5 frontman needs to step up his game now that Miley Cyrus is in the mix.

Recently, the trio of coaches hung out backstage, where Miley decided to challenge Blake to a hilarious dance off that looked an awful lot like an Irish jig. “Don’t just stand here and be big and tall,” Miley told Blake before busting out a few of her moves, “can you do this?”

The exclusive Entertainment Tonight clip shows an enthusiastic Miley wearing a stylish bun and pink pumps. She puts her hands on her waist and starts to move her legs rapidly. At first, Blake stood in hesitation with arms folded. But, then he began to follow her lead.

“Does this make us friends now?” Blake asked Miley with a grin on his face. To his response Miley said, “yea.” That’s when Blake proceeded to tell Adam, “Get back! It’s just me and Miley now!”

The moment was just one of a bunch featured in a blooper real dedicated to the reality television singing competition. The video also featured coach Alicia Keys and current key advisors Faith Hill and Tim McGraw. 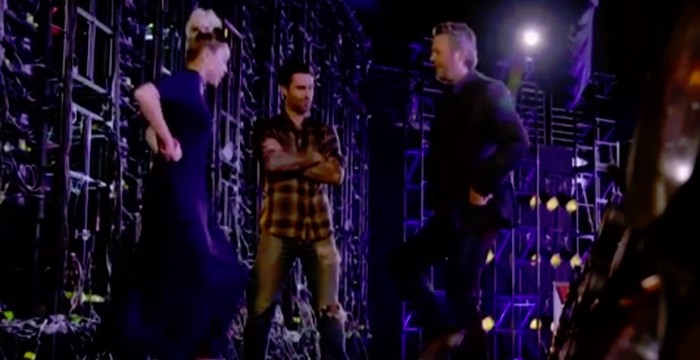