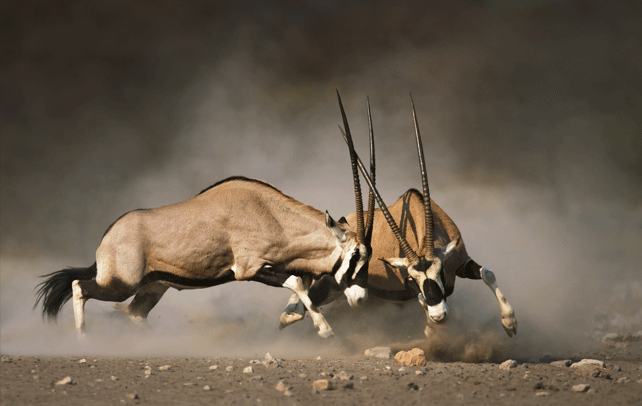 The graceful oryx belongs to the category of being one of the rarest mammals on earth. This animal is so much adapted to the parched and brutally hot landscape that its ability to go on without water for a prolong period can only be rivalled by that of the camel. Oryx is among the four antelope species of the genus oryx. Out of the four oryx species, three can be found in the arid tracts of Africa and the fourth specie is native to the Arabian Peninsula. Oryx has wonderful long spiky horns with a neck and mane resembling that of a horse. They have very supple muscular body structure with distinct black outlines against the white face. Their long horns are almost straight except that of the Scimitar Oryx, who has curved ones and lack the typical dark markings on the legs while the Arabian Oryx has light marks on the head.  During the ritualistic display of dominance, these antelopes show their distinctive features to exhibit their long ringed horns that can reach upto 1500 mm in length. Read the next section to know more about oryx.

Interesting And Fun Facts About Oryx