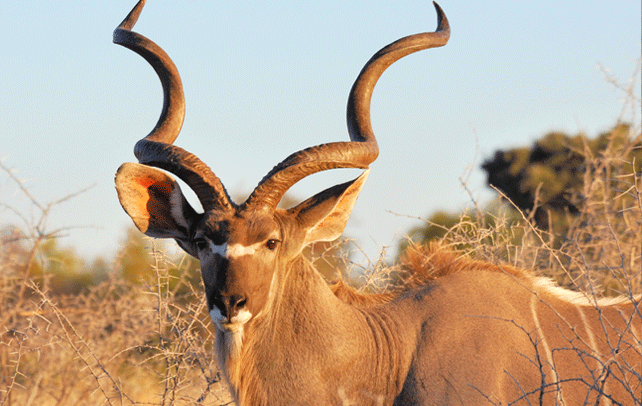 Kudu, a very unique and beautiful animal, belongs to the group of antelopes. The range of kudus stretches from eastern to southern areas, and includes Ethiopia, Tanzania, Eritrea, Kenya, Zambia, Angola, Namibia, Botswana and Zimbabwe. Lesser kudu and greater kudu are the two species belonging to the kudu family. These species have almost similar features, except their sizes as lesser kudus are smaller than greater kudus. Kudus are diurnal that means they remain active in the day and sleep at night while during summers they usually prefer to stay hidden at only one area in the woodland. Areas with abundant supply of water like rocky hillsides and thick bushveld are their preferred places. Their presence around these areas invites predators like, lions, leopards, and hunting dogs. But, the whole herd is alerted when any of these senses an attack from the predators. Kudus don’t have enough stamina to run fast and for a long time, so they hide themselves in bushes and keep on standing still. Below subsection provides more facts on kudus. Read on.

Interesting And Fun Facts About Kudu