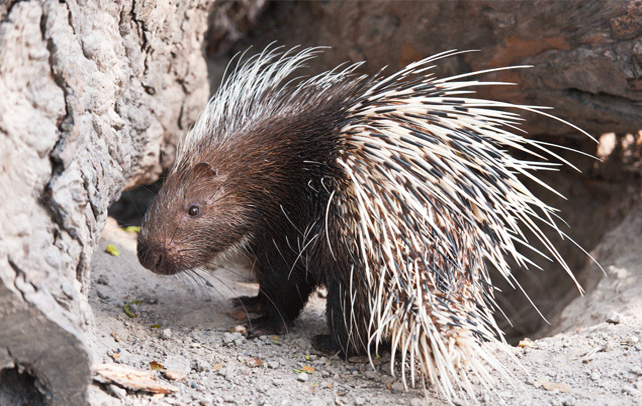 Porcupines, like monkeys, are divided into old world and new world species. They are very peaceful yet territorial rodents and may become offensive when threatened. Still you will find them adorable at the first look and you might want to cuddle them. But don’t be mistaken as they have quills that will lodge inside your skin. This unique feature of porcupines keeps them apart from other rodents like mice, possum, and alike. You can differentiate a porcupine from other rodents just by its quills. These quills protect the porcupine from predators. These rodents are classified into two families: hystricidae family, which has 11 old world species and erethizontidae family, which has 12 new world species. The only difference between the two types is of size and weight, wherein former tends to be larger and latter tends to be smaller and weigh lesser. Porcupines come in different shapes, sizes and colours. Their colours vary from shades of grey, brown, and curious white. They are the finest tree climbers. Their quills have been used as power of a superhero; for example, in the marvel comics called X-Men, the superhero is known as spyke. Read some more interesting and amazing facts about this cute rodent.

Interesting And Fun Facts About Porcupine