But much like all of your ex-boyfriends, this time they swear it’s going to be different. A new doomsday theory suggests that the world may be ending in September after it collides with a hidden planet, called Nibiru or Planet X, which is currently
Read More...

You know that rubber liner spray that’s supposed protect the bed of your truck? Turns out that shit works really, really well. What are your thoughts on this clip? We would love to hear from you. Also remember to hit the like button and
Read More...

ThinkGeek has created a set of Radioactive Elements Coasters that glow whenever you place your drink of choice on top of them. Each coaster features the “atomic number and isotopic mass of the most stable or common isotope for each element.” We love chemistry,
Read More...

Life Noggin explained how long it would take a person to fall through the Earth. To make the calculation easier, the video assumes there is a clear channel through the center of the Earth and that the channel is a vacuum to prevent air
Read More...

A TED-Ed lesson by Kim Preshoff gives a number of real world examples to help people visualize the concept of one part per million. The lesson uses things like kernels of corn in a truckload, bricks in the Empire State Building, and drops of
Read More...

It’s amazing that this isn’t on the front page of every newspaper in the world. This little powder will change the way you look at everything . . . If you take DMT you will communicate with something magical, mysterious and divine… a truly
Read More...

Jeff Lieberman, an MIT-trained artist, scientist and engineer, makes a scientific argument for mystical experience. Our minds are “thought-generating machines.” What we would happen if we could turn off the machine? If we could transcend our individual experience of the world? Subscribe to MBV
Read More...

”There is no matter.. as such. All matter originates and exists only by virtue of a force which brings the particle of an atom to vibration and holds this most minute solar system of the atom together. We must assume behind this force the
Read More...

For the first time, scientists have captured coral bleaching on video. The time-lapse footage reveals how corals inflate and contract to pump algae out when they are under stress. The new findings, published August 5 in the journal Coral Reefs, offer insights into how
Read More...

Researchers have successfully levitated a 50-mm (2-inch) solid polystyrene ball using nothing but high frequency sound waves. Although scientists have been able to acoustically levitate small objects such as water droplets for years, this is one of the largest spheres that’s ever been floated
Read More... 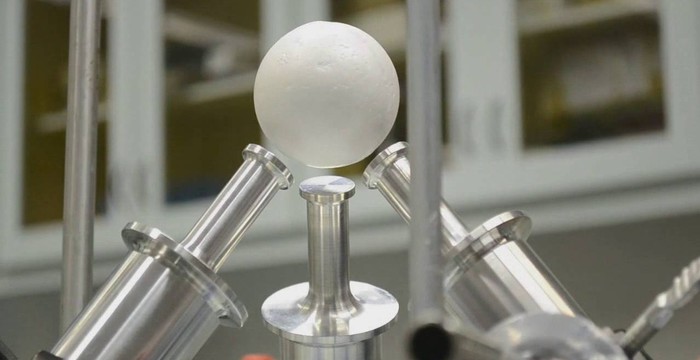